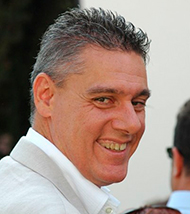 Master’s in Divinity (Rome, 1987) and in Social Work (Chicago, 1992)(Milan 1997). He has performed his professional practice as a Sociology professor on an academic level, later on as a coordinator of residential services for foster care in Milan. Since 1992 he has operated as adult trainer, consultant, supervisor and researcher in the social field for public authorities and private companies, for the health sector as well as for the social service sector in Italy and abroad. In 1997 he has been involved, as professional social worker, in EU programs and since then he started working on EU funded projects. After having completed related studies at the Venice International University, he works as project designer, consultant, manager, and evaluator of different European financing programs.

In recent years, thanks to EU funding, he has developed interest and expertise in the area of tourism which led hit to be, among other, administrator of a UK tour operator. He’s been educated as Destination Manager in the field and has been delivering training, supporting new trends of the market along with the use of social media in the travelling business.

Born in Germany, raised in his home country Italy, married in Greece, he speaks Italian, German, English, and Greek.